We are graphics professionals and we use graphics software on a non-stop basis. Thus it is important for us to get a display that gives us a high-quality image. Yes, a good monitor is very important. Regardless of your monitor, it is very important to have a good graphics card to drive the monitor.

These days there are really three major choices for video cards. First is video on the motherboard. This is not a good choice. It might be the least expensive in the short term, but it will cost you more time and trouble in the long run. Second is an ATI card. ATI has been around for a long time and they make good cards, but these days they are definitely not the best. Even so, the driver running the card is every bit as important as the hardware and I just don’t trust ATI’s drivers. That leaves nVidia cards as the very obvious best choice.

Recently nVidia released a new series of cards that easily runs the various benchmarks much faster than any previous card from any manufacturer. In fact, they won the tests with pre-release drivers that are certain to get better with time. Unless you are playing the latest and greatest games, you probably don’t need this kind of speed. But that doesn’t mean a fast card isn’t of benefit. 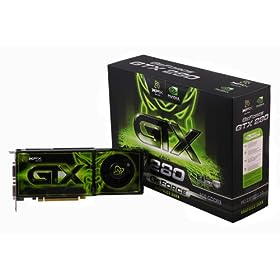 As designers we tend to want to run our monitors at higher resolutions. This requires more horsepower to push the larger number of pixels around. If you are working with dual monitors, you’ll need even more horsepower because there are twice as many pixels.

If you want the latest and greatest then you want the nVidia GTX 280. No, it isn’t cheap, but it is loaded with speed. You can take one step back on the speed and save yourself around $100 by going with the nVidia GTX 260. Believe me, you’ll still have a graphics card faster than 99.9% of the planet, at least in the short term. To save even more money, you can buy a card that is a bit over a year old, the nVidia 8800GTS. This is the card I have in my machine and I paid nearly three times as much as it costs today after rebate. It is a great card, it just isn’t the latest and greatest. But if you want bang for the buck, it definitely delivers!