For the CorelDRAW Unleashed User Conference, we ordered several new computers from Dell. Everything was great about the computers except for one thing. As I was preparing them, I found it next to impossible to type on the supplied keyboards.

They looked great and they had a very small footprint. But the functionality was absolutely awful. This reminded me just how important it is to have a good quality keyboard. Of course Dell doesn’t mention their keyboard anywhere and I couldn’t find a picture of one to show you. 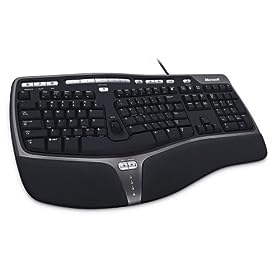 I’ve been using an ergonomic keyboard for at least ten years. That was probably part of the reason I struggled so much to use the Dell keyboards. I am a big believer in the ergo keyboards and my favorite is definitely the ones from Microsoft. Their latest and greatest is the Microsoft Natural Ergo Keyboard 4000 and it sells for under $40. If you are spending your day interfacing with a computer, it is important to have a tool that works with you instead of against you. Those of you who have never used an ergonomic keyboard may take a day or two to adjust, but after a short period of time you’ll absolutely love it. Another version of the keyboard is available packaged together with a mouse in the Microsoft Natural Ergonomic Desktop 7000. Since I rarely use a mouse, it isn’t really the right package for me. I’m a fan of Wacom tablets and we’ll talk about that in a future post.