My time away from the office is almost over. Today will be my last day at the SGS Show in Rancho Bernardo, California and I’m definitely ready to head home. Even during these travels, the blog must go on. I’m in the middle of a series talking about the new Core i7 processor. First we covered the processor itself. Last week we talked about motherboards. Today we’re going to talk about memory.

The Core i7 makes some changes in how memory is supported. It supports memory modules in groups of three, moves to DDR3 memory and bumps up the speeds supported. The folks at Corsair have some nice packages at different speeds and price points. One thing I like is that they offer packages with three sticks of memory to go with the new tri-channel memory architecture used by the Core i7 processor. 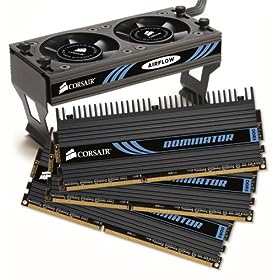 On the high end is the Dominator 6 GB 1800 MHz memory kit. It gives you three sticks of ultra-fast 2 GB memory for around $450. If you don’t need it to be quite that fast, you can go for the Dominator 6 GB 1600 MHz memory kit. It sells for around $235 for three 2 GB memory sticks and still runs at a very fast speed. It isn’t quite as fast, but cuts the price in nearly half.

The Dominator line is Corsair’s premium brand. They also have lower-priced memory. If you still want 6 GB of 1600 MHz memory, you can get it for under $195. Of course to get the most out of any of these machines, you’d need to run a 64-bit version of Windows to be able to see all that memory. To stay under the 4 GB limit, you can get 3 GB of 1600 MHz memory in the Dominator line for around $142 and in the discount line for less than $120. While there are more choices in slower speeds, I’d suggest sticking with 1600 GHz or higher to get the most out of your processor. And these prices are great for such a large amount of memory!