While I don’t expect you all to build your own machines, it is often good to at least know about some of the better parts available. If you don’t mind putting together a few parts, you might just enjoy building a new machine or upgrading your current machine.

In the world of processors, there are two major players making chips for Windows-based machines: Intel and AMD. There have been times when AMD has produced processors that were the best choice based on performance and price. At this stage, I don’t feel AMD can compete with the latest from Intel and therefore I’m going to focus on the Intel Core i7 processors which debuted in the past couple of months.

I don’t have the time or resources to collect every chip out there and benchmark the results. I do read the results published by the mainstream magazines. It is quite clear that the Core i7 chips smoke every other chip on the market. To get the best performance, you do need to pair the chip with an appropriate motherboard, memory and other components. 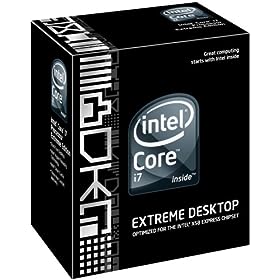 If you think that buying a Core i7 will break the bank, you’ll be happy to know that the 2.66 GHz model has a list price of $395 and currently sells for under $300 on Amazon. If you follow those links, you’ll find a complete description of the features on the chip. The quick rundown is that it has four cores which can each by hyper-threaded so that your computer will think there are eight cores. You can even tell it to go into “turbo” mode when working on a task that needs maximum performance.

As always, these prices will go down over time and faster versions will appear. I typically buy a processor that is one to two steps down from the fastest available. This gives me something really fast, but I don’t have to pay a crazy premium to get it.