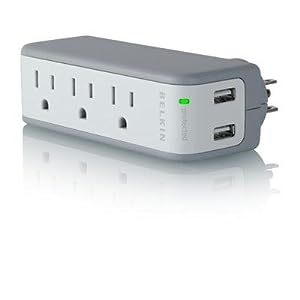 I talked about this incredibly useful surge protector a couple of years ago. Because I still find this one of the most useful devices I own, I thought it was worth discussing once again. The Belkin Mini Surge 3Out Wall Mount only costs around $15 so it isn’t a very big investment.

Check out the picture at right. It contains three outlets for plugging in your devices and two USB ports on the end. I don’t know about you, but I have several devices that charge via USB. I have a friend who misplaced their phone charger and has to charge the phone in her car. With this, any old USB to mini USB cable would charge the phone. The plug going in to the wall can be rotated so that the device is oriented however you like. The entire part weighs less than 10 ounces and is perfect for putting in your travel bag. Hotels and airports never seem to provide enough outlets and this helps to solve the problem. Pick one up for yourself, your co-workers and your friends. They’ll definitely thank you many times for such a useful device.