Last week I told you I would start providing the specs for “Dream Computer 2011”. Today will be the first post of the series. I hadn’t intended to start with video cards until I got the news hot off the ticker that nVidia had released some new video cards yesterday. Since we are dealing with a computer for graphics, having a good video card is an absolute must. I’ll admit that these new cards are high-end parts and come with a price tag to match. So I’ll provide a couple of other selections for those who want to save a few dollars. 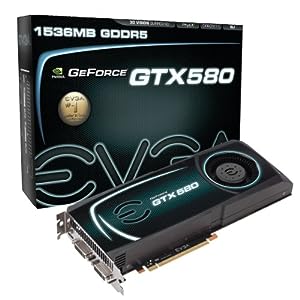 When users think of a high-end video card, they immediately think it only applies to gamers. That was certainly very true in the past, but the lines are starting to blur. The reason things are changing is that more “mainstream” graphics software is taking advantage of the processing power found in graphics chip on the high-end cards. This does not apply to the CorelDRAW Graphics Suite X5, but I wouldn’t be surprised if Corel started to use it in future versions. It is something that can be used by Photoshop CS5.

As of today, I found there were two cards available based on the nVidia GTX 580 chipset. They are EVGA GeForce GTX 580 and PNY XLR8 GTX 580. Both are priced under $540. Like I said, it is a high-end price. According to nVidia’s release, this card is up to 160 percent faster than the closest competitive product.

For those who want some bang but don’t want to spend so many bucks, take a look at the EVGA GeForce GTX460 which sells for under $170. It uses last year’s technology, but is still a very powerful card. There are certainly cards that cost less and provide even less bang. If that is what is already in your system, it probably isn’t worth upgrading yet. But if you are getting a new system, I wouldn’t look at less powerful cards.