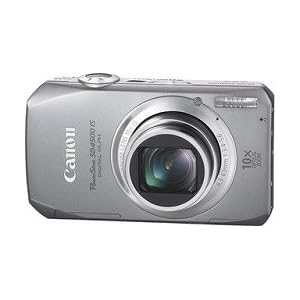 I was at a charity event a few weeks ago and was trying to take a self-portrait with my pocket camera. All went well until I dropped it and the lens got a little crooked. Every time I turned it on, I got a lens error. So I either would have to send it in for repair or it was time to get a new camera. That could be buying the same model, or I could go ahead and get a different camera. Replacing with the same model wouldn’t be much more expensive than the repair. I decided to go ahead and get a newer model with a few more features.

I really liked the Canon PowerShot SD940IS I had. So I looked to see if there were newer models in the same family and found the Canon PowerShot SD4500 IS Digital Elph. The one feature that really jumped out at me was that it has a 10X Optical Zoom. That’s a huge jump from the 4X in the camera I had and also amazing for a camera that fits in my pocket. My old camera could shoot video in 720p and this shoots in 1080p. I don’t shoot a lot of video, but it is nice to have the ability to shoot in full HD if needed. I haven’t had a chance to shoot many pictures yet, but I’m really happy with the new camera so far. Of course the first thing I did was attach the wrist strap so I wouldn’t drop this one.