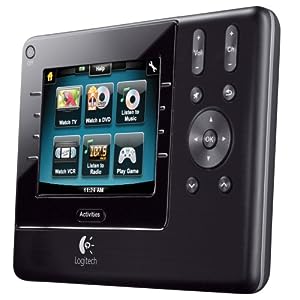 Last summer I talked about the Harmony line of Universal Remotes from Logitech. At the time, I wasn’t in the market for a new universal remote as I had an older one that was still quite useful for me. As with many electronic devices, the usefulness of the old remote was slipping fast. I took the plunge and got a Logitech Harmony 1100 Universal Remote and wanted to share my experience with you.

Most of the work for this remote is done on a PC. That was also the case with the remote I used previously. Part of the reason it was time for me to get a new remote was that my previous choice wouldn’t work with newer 64-bit operating systems. So to update the old remote, I had to keep an old computer around. One thing that surprised me with the Logitech Harmony 1100 I received was that the driver disc supplied did not have Windows 7 support. I could understand that a year ago, but Windows 7 has now been available for almost 18 months. This was only a temporary problem as I was able to download new software that worked just fine on my Windows 7 64-bit system. It is also important that you install it on a computer that is connected to the Internet.

In the software, you first define all of the electronic devices you want to control with the remote. For each device, there are three pieces of information you need to supply. First, you will define a category for the device. Is it a television, DVD player, game machine, etc. Next, you need to identify the manufacturer. There is a very long list including many companies that are new to me. The last piece of information is the model number of the device. Logitech even provides a little form inside the manual so you can look up all of this information and write it down before running their software. The whole process took me about five minutes to complete for the six devices I wanted to control. When you have all of your devices identified, the software will find all of the information needed to control them on the Internet. This means that even the latest and greatest devices will be supported nearly as soon as they are released.

After you’ve identified the devices, you need to define the activities you want to control. One example would be watching TV. You will tell the software the list of devices used when watching TV and any special settings for them. So you’ll want the TV turned on and you can specify which input the TV should use. In my case, I have an audio/video receiver that controls the sound. I also specify that I want it turned on and which input it should use. You may also have a satellite or cable box involved in the process. It took a little longer for me to define the activities, but probably less than ten minutes.

When you have all of the devices and activities defined, it is time to connect the remote via USB to your computer and transfer everything to the remote. It might take another minute or two for that. After you get the data on the remote, you might want to go back to the software and make a few changes.

All in all, I was pretty amazed. From the time I opened the box until I had the remote functioning just the way I wanted, it took maybe 30 minutes. Since then I’ve made one or two changes in the software and downloaded them to the remote. Now that I have it the way I want it, I probably won’t need to change anything until I get a new device. I couldn’t have ask for anything easier and I’m extremely happy with my new remote!