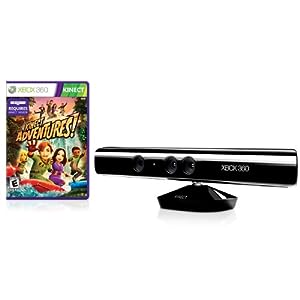 I’m not someone who plays videogames very often. In fact, it had probably been at least six months since I last turned on the Xbox 360 console. But it was time to play again since I had gotten the Kinect Sensor. Now why would I get the Kinect if I didn’t play that often?

I really liked the idea of a Kinect because it would allow me to control the game through body movements. Not only could I have some fun, I could get exercise at the same time. Some relatives had sent me a gift card for Christmas and I couldn’t figure out anything else of interest so I used it for the Kinect.

Setup was really easy. I just had to plug it in. When I next turned on the (now dusty) Xbox 360, it asked me to update the software. I had to do a few things to calibrate the Kinect and then it was time to start playing. Along with the Kinect is the Kinect Adventures game. I think there are six different adventure games included.

The games are fun to play and you definitely get your blood pumping as you jump around the room. At the end of each game, you will see a picture or video of yourself looking like a complete idiot dancing around. While it looks crazy, it is funny to watch.

I don’t expect to play games every day, but the Kinect will definitely have me playing more often. It is definitely a really cool accessory.