I’ve written about several wireless routers this year so maybe you already guessed that I’ve been in the market for a new one. My previous router was over three years old. From a specification standpoint, it did everything I needed. Unfortunately I had to reset it several times a week as the speed would degrade over time to the point it was below dial-up speeds. It also didn’t have the greatest range.

After looking around, I decided to get the TRENDnet 450 Mbps Concurrent Dual Band Wireless N Router. It had the features I wanted and had gotten good reviews from sources I trust. It arrived and I set aside some time to set it up. The result was a disaster as the configuration Web page in the router would never display. Tech support had never heard of such a thing and suggested I return it for a replacement. Since I got it from Amazon, it was very easy to swap it for a new one. The next one arrived and had the exact same problem. Again I called tech support and was told that they were having issues and I needed to call back in 30 minutes. That was enough for me so I returned the second one and began a search for a different model. 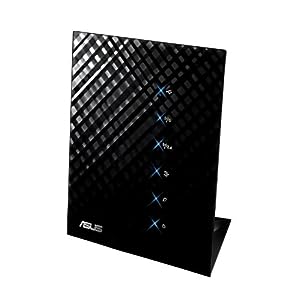 My next choice was the ASUS Black Diamond Dual Band Wireless-N 600 Router pictured at right. Once again I set up some time when it arrived to get it installed and configured. The configuration Web page immediately displayed and I had all the correct settings entered in no more than ten minutes. That included turning on the wireless security and assigning SSID names and passwords for both included radios.

I immediately noticed that I was getting full speed from my connection. That was normal when I reset the old router and I’ve yet to notice any speed degradation after a few days. Places in my house that used to get poor signals are now getting almost full strength. I’m also noticing Web pages just plain load much faster. In short, I am thrilled with the new router and wish I had gotten it sooner. If you are in the market for a new router, you should definitely include this on your short list of choices.