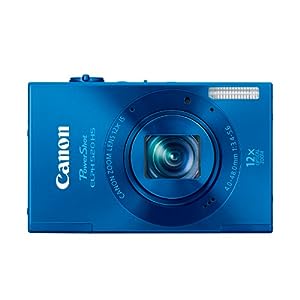 Early January is a great time for electronics goodies. This is due to the Consumer Electronics Show held each year in Las Vegas. There will be products announced that never materialize. Other products won’t be available for quite some time. Then there are the products that are available almost immediately.

I love to take pictures, but I hate carrying a big camera with me all the time. Taking pictures with a cel phone works, but they just aren’t the same as a dedicated camera. For that reason, I often carry a small camera in my pocket in case the need to snap a decent photo should arise. Canon just announced the Canon PowerShot Elph 520 HS at the Consumer Electronics Show and it should be available by the end of March. It can already be pre-ordered for under $300. Note that Amazon’s policy is that if the price drops before it ships, you’ll be charged the lower price.

It is loaded with features in a very small package. Images can be shot as high as 10.1 megapixel. The built-in processor makes shooting in low-light situations passable without using a flash. You can set the ISO as high as 3200! Yes, it also does HD video. It can shoot wide angle as well as 12x optical zoom. The touch panel on the back of the camera is pretty darned big and has a wide viewing angle. In short, this is a great camera to carry in your pocket and the price is low enough that it won’t break the bank!