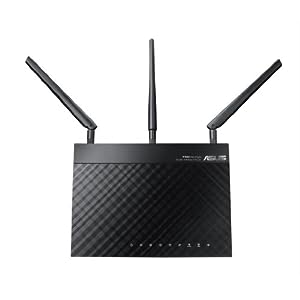 Last November I wrote about the Asus RT-N56U Wi-Fi Router that I had gotten here in the Graphics Unleashed offices. It was a significant upgrade over our previous router and I’m still very happy with its performance after eight months of use. But technology marches on and the Asus RT-N66U Dual-Band Wi-Fi Router has been released that is loaded with great features.

There is one big visual difference and that is the three detachable external antennas. That alone is a huge upgrade because you can replace them with higher-powered antennas if you want stronger signals. The old model had internal antennas that can’t be changed. While the antennas on the previous model can’t be changed, I found this gave me much stronger signals than the router it replaced. I find the possibility of getting even better coverage to be a strong selling point.

Both 2.4 GHz and 5.0 GHz frequencies are available for use and can be configured with separate SSID names. If there is a downside to this router, it would be the price as it sells for around $180. If you want a strong, fast connection then it is worth every penny!

I want to wish everyone a very Happy Fourth of July as the United States celebrates its 236th birthday today. Now that the blog is done for the day, I’m going to enjoy the holiday.