The Importance of Product Photos in eCommerce

In the good old days of shopping, potential customers would go to a store and look at products in person. They would pick up the product and examine it to see if it was something they would like to purchase. Catalog shopping introduced the need for great photos. Most companies producing catalogs were large and they worked closely with photographers to get the perfect shot of each product.

As more and more shopping moves online, a good photo is increasingly more important. Yet businesses are often looking for ways to keep their budgets under control. This leads to poor photos that may actually discourage shoppers.

Let me share two stories about recent client interactions with regards to product photos. In each case there were issues that needed to be resolved so good photos of their products could be posted.

The first case is very small company producing fashion accessories. Years back there were pictures taken of their products. Unfortunately they are only saved in a small size with too much JPG compression. The existing pictures aren’t horrible, but they aren’t good either. New pictures needed to be taken to help a new Web site appeal to buyers. Last month I wrote a post titled Prepping Product Photos For Online Stores, Such As Amazon filled with good advice.

I discussed the concepts in that post with the client and a few good pictures were produced. The client was still very reluctant and it was discovered the issue was the possibly of theft. Yes, there are bad people in the world who will still your hard work. Heck, I won’t be surprised if someone steals this post and claims it as their own. After more discussion, I was able to convince the client that the benefits of the new photos far outweighed the fears of theft. The new Web site with the new photos is looking really good! 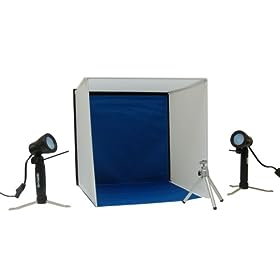 In the second case, the client sells products geared towards high-end ink jet printers. The first set of photos we received had two major issues. First, the pictures were dark and very flat. Either the scene needed better lighting (read Parts of a Mobile Photo Shoot for more details), flash needed to be used or a better camera needed to be involved. Heck, it could have been all three. Sure we can improve the photos with software, but having poor originals limits the improvements possible.

Not only were the pictures dark and flat, they also were composed in a weird way in that too many products were in the shot. They sell the Cyan, Magenta, Yellow and Black ink separately. Yet every picture contained all four boxes with the “highlighted” box on the top of the stack. This just seemed like a good way to confuse buyers who may think they would get all four colors when in fact they would only get one.

We did convince them to reshoot the photos with only a single product in the shot. Unfortunately the pictures were still dark and flat. Hopefully the next round of photos can produce better originals so that everything will look really good!

I’ll leave you two previous posts about getting better photos of your products: