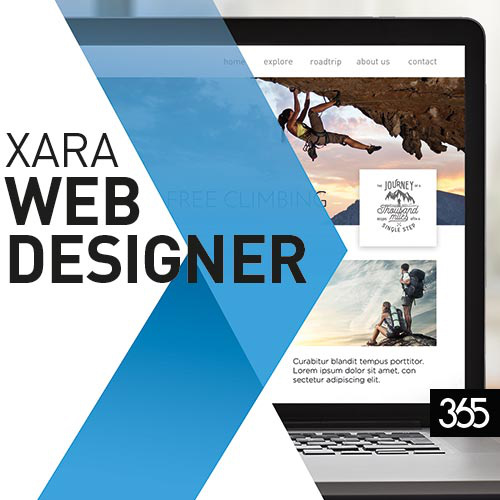 The folks at Xara are not only keeping up with what Web designers want & need, they’re pushing Web design boundaries in all the right ways. The bells & whistles are all there in Xara Web Designer 365 – parallax scrolling effects, sticky elements, animations, photo grids, smart shapes, clipart, widgets, cloud editing and more. Impressive is with so much included, this Web design tool can certainly be considered a tool of choice.

When opening Xara Web Designer 365 Premium, it is nice to see the familiar desktop which makes it easy to get going quickly if you’re a Xara user.

The Content Catalog is my first go-to when opening Xara Web Designer upgrades as I can’t wait to see what new goodies have been included. It was introduced with Web Designer 10 and has been updated with a new look and expanded features that makes this really good concept even better.

The new Content Catalog was a happy surprise, and took seconds to appreciate. The catalog did load a little slower than the older version. However, once up & running, the layout is bright and intuitive. It presents a large, clear interface that gives a logical and comprehensive view of all design elements available. Once you decide to use a particular element, you now either hover then click on the download button, click on the element itself, or drag/drop on to your page. The addition of a new content search box makes the content catalog a standout. Located at the top of the catalog frame, you now simply type in what you’re looking for and, depending on how the element has been key worded, a wealth of choices visually pop up. As an example, type “chart” and all available chart graphics, icons & chart widgets are displayed. This is a real time saver as there are so many elements available with Web Designer that the ability to find the one quickly, without visually scrolling through the wealth of choices, is appreciated. Once you find the component, you simply add the item to your project.

My only wish? For the catalog to have the ability to stay open, then close at will. Currently it opens when you want to add an elements, then once you’ve selected, the element is dropped into your project and the catalog closes. In the initial development of a Web site, typically you include several elements. To select one, then select another, etc. without the slowdown in opening the catalog each time would be great.

On to designing Web sites. As always, with Xara Web Designer, you can begin from scratch or start with a template & run. This is drop, drag & design at its finest. The new version is loaded with templates that were available previously only with additional purchases. As mobile Web site variants are now essential, the Xara Web Designer variant tools take on a new importance. Rather than settling for what the template dumps to mobile when using content management/blog sites, Xara lets you fine tune what you put on your mobile variant, how it will look & behave. Plus, each variant can have unique features that are well suited for one platform, and either unnecessary or unsuitable for another. A Web site I updated with the new version illustrates variants. Take the time to look at the site not only on your PC but on a smartphone & tablet. The differences are obvious, but this site has quite a bit of function variations integrated, depending on the platform.

Bottom line – should you buy it & will you like it? Depends on the Web site you’re designing. For a vast majority, it’s well worth it.