Keeping your business (or personal) data secure is of utmost importance. If you lose it, what is the value of that loss? We each have a different answer, but it can be a huge number. I know that backing up data is often an afterthought for users and I’m working on a future post about a cloud backup service. Today we’re going to focus on a solution that can sit on (or under) your desk to give you an added layer of data security. Even better, it will integrate with the cloud backup I’ll cover in a future post. Yes, I’ll include Amazon links that earn me a very small amount while still giving you the best prices available. No, I didn’t receive anything else for writing this.

Let’s first go over the concept of a NAS (Network Attached Storage) drive. Based on the name, it connects to your computer network via Ethernet cable. Maybe your network is one computer and maybe it is many more. Each computer can access the NAS drive and can even have its own dedicated storage space. While it is slower than an internal hard drive, you can use it to store all your data. Or you can have your computer back up to the NAS drive. Heck, you can do both and that is exactly what I do.

Another way to think of a NAS drive is of a separate computer. Yes, it has a processor and memory like a computer. But its main focus is on storage. This means you can run apps on the NAS drive to perform a wide variety of functions, like the cloud backup I’ve referenced. The Asustor AS5304T 4 Bay NAS has an Intel Celeron J4105 Quad core CPU with 4GB DDR4 RAM (expandable up to 8GB). That gives you lots of power to run apps. It has 2, 2.5 Gigabit Ethernet ports giving you very fast transfers if your network supports it. If you want to use it for streaming video, it has HDMI 2.0a output with 10bit 4K support. 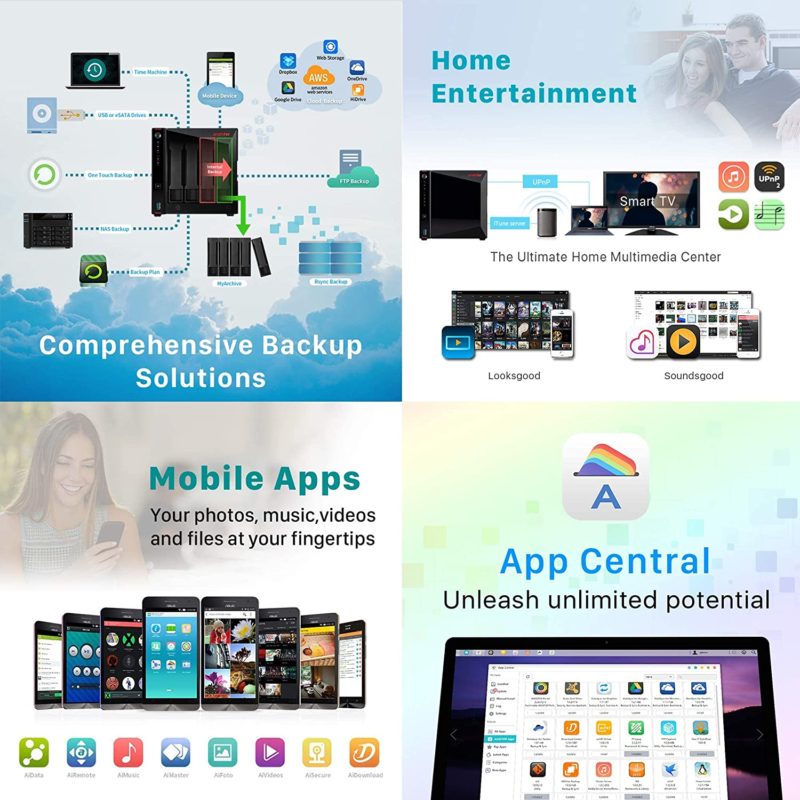 When you buy the Asustor AS5304T 4 Bay NAS, it only includes the computer and not the drives you’ll need. This allows you to choose the amount of storage you’ll want. You’ll find a very long list of drives compatible. I’d suggest you select four of the Western Digital WD Red Plus NAS Internal Hard Drives in the size desired. Below is a list of six possible sizes.

In theory, the maximum storage capacity is the total amount of all the drives you’ve installed. But you’ll likely want to set up the drives in a RAID configuration as another layer of protection against drive failure. This could limit the total storage to one-half or three-quarters of the total installed.

There was also a massive software improvement to many of the ASUSTOR NAS units, including this one. Think of it as an operating system (like Windows or MacOS) update. This update brought a lot of added security to protect against ransomware attacks along with performance and visual improvements. I’ve installed the update on my older ASUSTOR NAS drive and it was a very smooth upgrade with immediately obvious improvements.

Yes, a NAS drive is an investment when you first get it. I can tell you that it gives me peace of mind to know my data is protected. Once you add the cloud backup I’ll discuss in a future post, you’ll know that you are always backed up with redundancy. Best of all, it is very easy to do!