“It Was Forty Years Ago Today…

…Sgt. Pepper taught the band to play.” OK, I’ve made one little change to one of the most famous opening line of an album for historical reasons. You see, today is the fortieth anniversary of the release of the Beatles’ Sgt. Pepper’s Lonely Hearts Club Band album. It was on the twentieth anniversary that they released for the first time on CD and I remember running out to get a copy. So the news that it has now been forty years has definitely made me feel old and I’m sure many of you will have the same feeling.

I also remember the 1978 movie Sgt. Pepper’s Lonely Hearts Club Band. As movies go, it wasn’t that good. But there were a number of famous names that were in the movie and that made remakes of the various songs. The Bee Gees, Peter Frampton, Aerosmith, Earth, Wind & Fire, Alice Cooper along with amusing performances by Steve Martin and George Burns. Jeez, that movie is almost thirty years old. 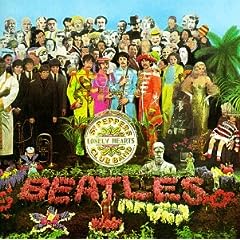 Since we focus on graphics, let’s talk about the graphics on the album cover. At the time the graphics were as groundbreaking as the album itself. You’ll see a graphic of the cover at right to help remind you of the cover art. Today it would be fairly simple to recreate something like this using our favorite Corel products.

As I was working on this, I pulled out my twenty year old CD and read through the liner notes. Do any new CDs include liner notes? It sure doesn’t seem that way. Anyway, I digress. I had never realized before that the collage on the cover is actually just one photo. The band posed with large cutouts of the various other luminaries on the cover.

If you’re looking for a project to teach you a few new tricks in Corel PHOTO-PAINT, how about recreating your own version of an album cover. Find head shots of some of today’s most famous names, cut them out and arrange them. Of course, you should be listening to Sgt. Pepper while you are working for some extra inspiration.