Most Popular Accented Characters and Symbols Can Be Added Via Keyboard Recently someone used my Hire the Geek service to have me observe some of their typical tasks in CorelDRAW. Once I observe their workflow, we’ll put together training to take their skills to a higher level.

One thing I noticed was that the Insert Character Docker (shown at right) was open during our entire session. Note that the user had CorelDRAW X4 and my screenshot is from CorelDRAW X6. I asked about this and was told how the user was frustrated that they could no longer use a keyboard code to get accented characters and symbols like copyright or registered trademark.

This was a headscratcher to me as I’ve always entered them via keyboard shortcuts and even mentioned that the keyboard shortcut for the e acute was shown right in the Docker. Simply hold down the Alt key and press 0233 on the numeric keypad (not the numbers at the top of the keyboard). Release the Alt key and you’ll have the desired character. I can only guess the user had done something wrong at some point in the past and just made the assumption that it was no longer possible.

This isn’t just a CorelDRAW feature, it works in pretty much any Windows program. Below you’ll see a screenshot from Windows Character Map (supplied for as long as I can remember with Windows). I’ve selected the same e acute and you’ll note at the bottom right is the same exact keyboard shortcut. 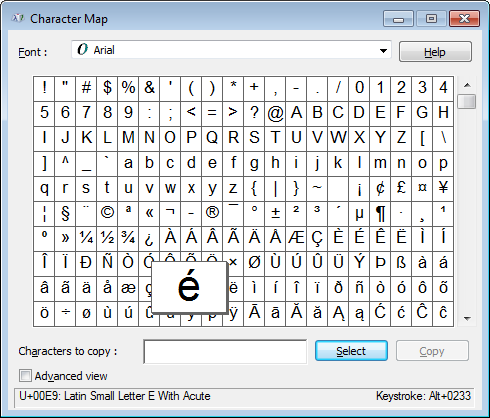 What I typically recommend to users is that they find the accented characters, symbols and other non-keyboard characters and make a cheatsheet of the shortcut keys. I have 8-10 of my most used characters memorized so I can easily insert them whenever need in whatever software I’m using.