When Adobe announced that all future versions of their Creative Suite products would only be available via subscription, the requests from Mac users for a native version of CorelDRAW started rolling in. I wrote Why You Shouldn’t Expect a Mac Version of CorelDRAW two years ago and I honestly don’t believe much has changed since then.

Let’s get a few things out of the way. First, I don’t work for Corel. My opinion is simply my opinion, though I’ll provide some detailed rationale for my opinion. If you think I’m against a Mac version, you are wrong. A native Mac version of CorelDRAW would actually help my business. This is also not to debate the superiority of Mac or Windows. If you are happy and productive with your choice of operating system, that’s the only thing that matters.

It is very important to understand that you can run the latest version of CorelDRAW on your Mac right now. To do so, you’ll have to install a Windows virtual machine using Boot Camp, Parallels Desktop or VMWare Fusion. Some of you have no desire to have Windows on your Mac and I understand that. It is your choice. Just as it is Corel’s choice to not develop a native Mac version. If you want to run CorelDRAW today, this is the answer and it works great. This is also one of the biggest reasons why I don’t feel Corel will develop a native Mac version. Why risk investing millions of dollars when there is a solution that exists today?

How much would it cost Corel and how many copies would have to sell? Let’s look at the numbers I provided two years ago as they are still valid today.

Thus we need to look at the sales required to make a Mac version profitable. I’m going to use North American prices of the Windows version to come up with some numbers. The full version lists for $499. I’m going to say the average sale price is $399. Upgrades sell for $199 and I’m going to say the average sale price is $179. I’m going to assign a cost of $50 to producing a box with manuals, discs, etc and shipping it to distributors. In addition, there are marketing and support costs associated and I’ve assigned $20. Those numbers could be high and they could be low. Overall should they should be relatively close. Based on those numbers, the money going to Corel is $329 for a full version and $109 for an upgrade. I’m also going to make an assumption that the number of full and upgrades sold is equal, though likely the upgrades are a much higher percentage.

As you read that paragraph, it is important you understand that my numbers show you need to sell 5000 copies for every $1 million in development costs. I’m not saying the cost would be $1 million as I actually think it would be much higher. Recently I had someone debating the idea with me on Twitter and this person said 15,000-20,000 units was possible. OK, that would cover $4 million in development costs and I’m guessing the cost is at least twice that so it would still result in a huge loss for Corel.

It is important very important to understand that some very deeply embedded features of CorelDRAW use Microsoft technologies that just don’t exist on the Mac. The world of CorelDRAW add-ons and macros is vast and they are all dependent on VBA and/or VSTA technologies licensed from Microsoft. As neither is available on the Mac, none of the macros and add-ons would work on the Mac. If Corel wanted automation technology, they would either have to license something else or develop their own. Corel CONNECT, part of the CorelDRAW Graphics Suite, is based on Windows Explorer. Again, it is only available on Windows so a suitable replacement would have to be built from the ground up. I’m sure there are many more areas where Windows technology is deeply embedded, these are just the biggest hurdles to overcome. If there were a native Mac version of CorelDRAW, it wouldn’t truly be the same product except in name.

In a recent post on the issue, a Corel representative said “Adobe’s recent announcement will put the discussion back on the table.” This one sentence got users excited. Users of Corel Ventura have heard similar statements when asking about an updated version of Corel Ventura for Windows. Corel last updated Corel Ventura in 2002. Suffice it to say, that statement shouldn’t give you much hope based on the history of Corel. It is also important to understand Corel has released three previous versions of CorelDRAW on the Mac (yes, they were ports) and all were failures. If your business had tried something three times and failed, would you really want to try again when you risk losing millions of dollars? 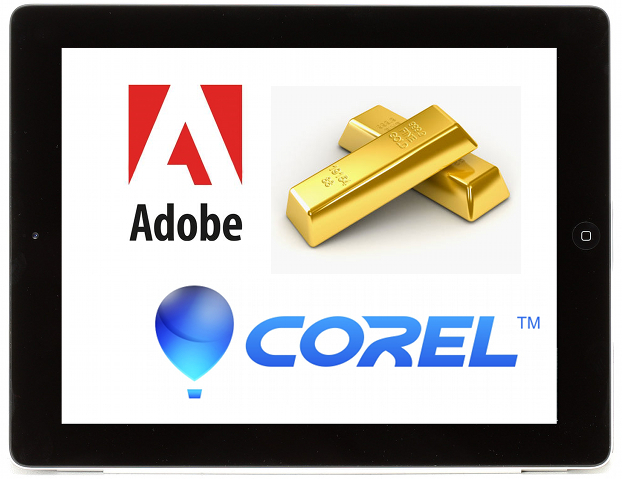 For those who want to really push the issue, there is one scenario that would greatly increase the chances of seeing CorelDRAW on the Mac. Of course this scenario would also give Adobe real competition in the world of graphics. Convince Apple to buy Corel! Last year I wrote Could Apple Buy Adobe or Corel? and the reasons for such a purchase have grown since then. Apple has mountains of cash in the bank, so they could easily handle the purchase financially.

So if you are a diehard Mac user who truly wants a native version of CorelDRAW, raise your voices to Apple as they are the company who could truly make it a reality!